Was Saba Qamar’s Phone Hacked Through the Houseparty app?

The actor’s manager, Meshal Cheema, took to Instagram to share that Saba might have been hacked – Meshal received calls from Saba’s number with an unknown male on the line, all the while Saba had her phone with her.

According to Meshal’s testimony on her Instagram story, she “got almost 10 calls from Saba’s number asking me if I am Mishi and the person was an anonymous young man.”

She went on to explain that the man said that he had found the phone at a park Saba jogs at, and upon inquiring how he accessed the phone, he implied that he found it unlocked. “I asked him who and where he is, to which he kept asking if this is Saba’s number and when I got mad, he cut the phone,” she wrote.


To my Person, Happiest Birthday to the Ultimate Diva, the most beautiful person inside out my one and only Q.U.E.E.N @sabaqamarzaman ??????? I think that you are placed into people's lives for a reason. Sometimes I wonder how I got so lucky and what I have done to deserve a friend/mentor like you. I could really write a book about the positive affect you have had on my life. These videos can really show the bond that we share with each other and it's never a dull moment at all! You're nothing less than a family to me and i feel blessed to have you in my life. You believed in me when I didn’t believe in myself. You loved me when I was hard to love. You listened to me when I didn’t have a voice. But most importantly, you'll always be my Go-To person no matter what because whenever my confidence lags you re assure me of myself! And I think, That is special in every sense. Thankyou for being YOURSELF! ❤️ Thankyou for understanding my odd sense of humor, my love for sarcasm, also for laughing at my terrible jokes and side comments. I have never had a bad moment with you. You are the epitome of a beautiful human being. I hope that every person in this world has someone like you in their lives. -Signing off with lots of love and Duaas always! ?? #SabaQamar #SabaQamarZaman #Birthday #IGdaily #BirthdayGirl

That’s not all, Meshal relayed that she proceeded to call Saba who told her she is home. “She was shocked that how is someone using her number to call.”

Meshal then added that they suspected foul play through the video chatting app Houseparty that has been gaining popularity during the lockdown – scores of people are using it to stay in touch with friends. 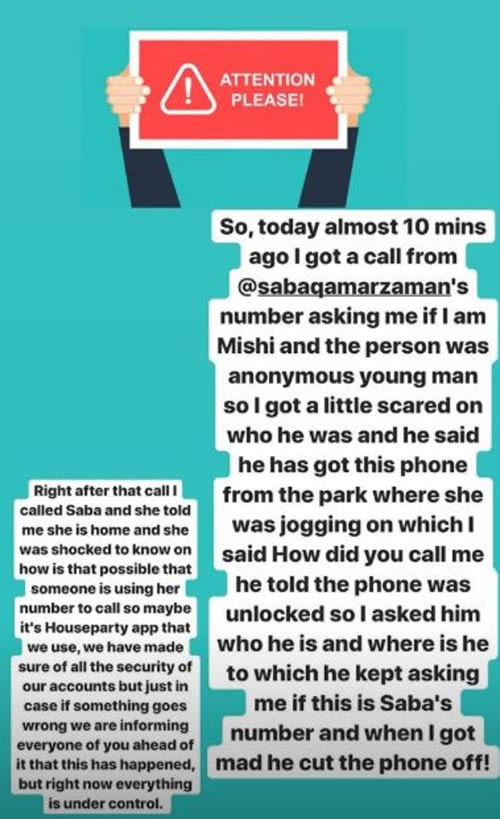 The app has come under scrutiny more than once on Twitter as well, with people claiming that they have been hacked through it.

However, there is no concrete proof of such a hack actually originating from Houseparty.

As of right now, things are under control at Saba’s end, as confirmed by Meshal in her post. “We have made sure that all accounts are secure now, but just in case, if something goes wrong, we are informing every one of you ahead of time that this has happened,” she said.